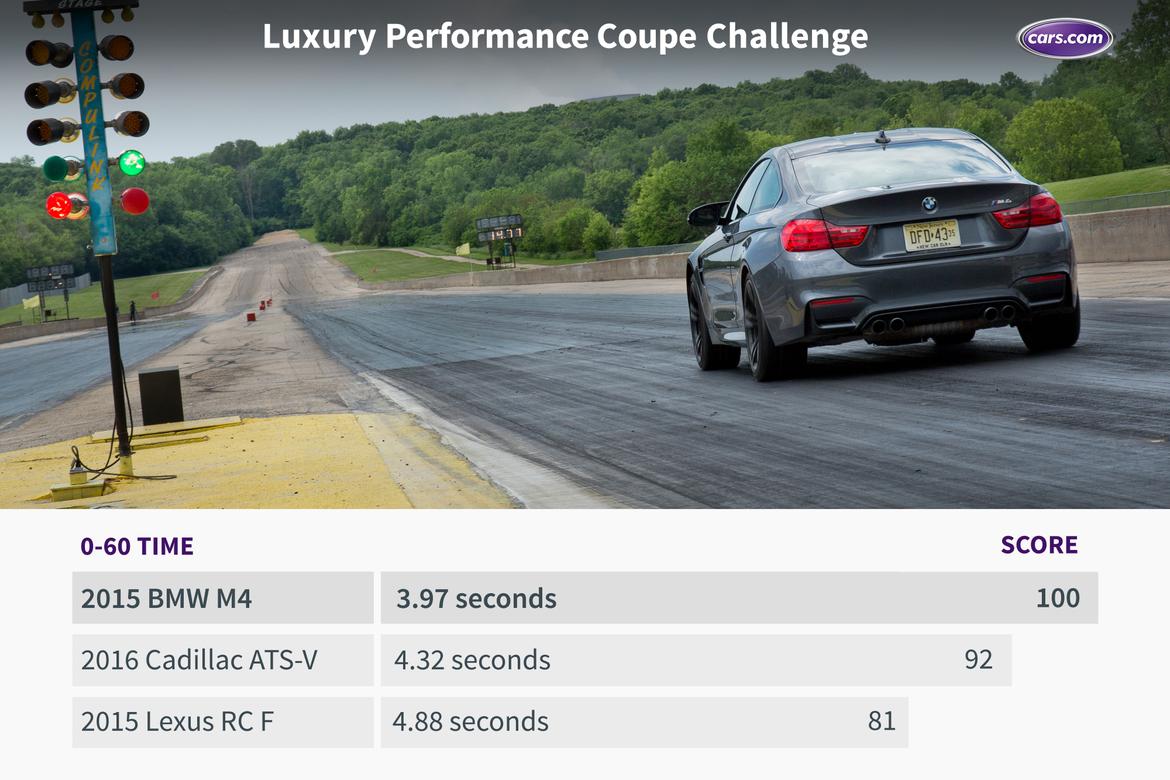 The Cadillac ATS-V, BMW M4 and Lexus RC F are stealthy performance packages over their non-performance counterparts, so it's easy to fly under the radar until an in-the-know gearhead spots the M, V or F badges and excitedly shouts at a stoplight, "How fast is it?!"

So, how fast are they, really? We measured zero-to-60-mph and quarter-mile acceleration along with 60-mph-to-zero braking distances at the Byron Dragway in Byron, Ill. We then spent a day evaluating ride and handling at the Autobahn Country Club in Joliet, Ill., on its 1.46-mile, nine-turn North Circuit.

The BMW M4 and its seven-speed dual-clutch automatic transmission was the undoubted hot rod of the group, with acceleration unbecoming of its 425-horsepower rating, the lowest horsepower of the trio. It does make 406 pounds-feet of torque at a very low 1,850 rpm. The M4 felt fast on the street and backed it up with a zero to 60 mph in 3.97 seconds while it finished its quarter-mile in 12.05 seconds at 118.35 mph, the quickest times and fastest quarter-mile speeds by a good margin. We tried the M4's Launch Control to improve its times, but the race-start launch only resulted in violent wheel hop. The quickest acceleration came with all assists off, engine and transmission in Sport Plus settings, the suspension in the softest setting and a little overlap of the brake pedal and throttle to get the revs up before launching.

Next was the Cadillac ATS-V with its six-speed manual transmission. It would have been great to test an ATS-V with the smart-shifting eight-speed automatic transmission we drove at Wisconsin's Road America and Texas' Circuit of the Americas racetracks, but Cadillac didn't have one available. The 464-hp Caddy scooted to 60 mph in 4.32 seconds and ran the quarter-mile in 12.41 seconds at 115.62 mph. Like the M4, the V's best runs came without Launch Control and with all assists off. The ATS-V's no-lift shift feature is most appropriate for the dragstrip where the go-fast feature let us bang gears without lifting the accelerator from the floorboard, making for impressively fast shifts. Dialing in the launch took a little work, but the best numbers came in Track mode while slipping the clutch around 4,000 rpm and using no-lift shifting down the track.

Judging from the exhaust notes, the Lexus RC F sounded like it should have been the clear winner with its high-rpm wailing from the 5.0-liter V-8. The RC F trailed the others in acceleration with zero to 60 mph in 4.88 seconds and the quarter-mile in 13.12 seconds at 109.11 mph. The RC F leisurely left the starting line without the vigor of its competitors ? even with the drive mode in the raciest Sport S Plus, differential set to Track and with the electronic assists off. If you try too hard to overlap the brake and accelerator from the line for higher revs, the car fights back by lighting up the dashboard with warnings and dialed-back power. While the most powerful of the group, the 467-hp RC F was the heaviest of the competition (at 3,958 pounds), and had the least amount of engine torque (389 pounds-feet) made at the highest engine speed (4,800 rpm). The ATS-V weighs 3,700 pounds and the BMW M4 is lighter yet at 3,585 pounds. No one really yells, "How fast does it stop?!" at a stoplight. Still, each car includes more stout braking packages than their pedestrian counterparts, so we tested all three before we beat the snot out of the brakes on Autobahn's tight road course. The Cadillac ATS-V's brakes felt confident prior to testing and surprised us with the shortest braking distance of 119.47 feet from 60 mph. The BMW's optional $8,150 carbon-ceramic brakes stopped the M4 in 122.85 feet, and the RC F did the deed in 127.68 feet.

Going into the Challenge, the BMW M4 had a target on its back, and for a good reason. It's been so good for so long as the M3 coupe (in its previous life), and the competition has stepped up, in a big way: The ATS-V and RC F are newcomers to the luxury performance coupe segment for 2015 with promises of track-capable performance. The street driving, measured acceleration and braking were a good start, but what would really give us an indication of how dedicated these cars are at toppling the king was to be found on the road course.

After a few laps of rotating between the three cars, it became clear to the judges that two contenders were going to be duking it out: the M4 and ATS-V. What we observed in the RC F is it is a drifting machine. Cars.com Executive Editor Joe Wiesenfelder said, "The RC F is a more tractable car than the IS F was, and while it's more trackworthy, some of the rear-end squirreliness remains. In some ways it's fun ? driftable yet controllable. Unfortunately, it might want to drift more than you do."

Cars.com Road Test Editor Joe Bruzek also noted how free the RC F drove around the tight Autobahn road course. "Coming from a brand associated with cushy street driving, the RC F is surely one of the most capable cars it's made since the LFA mid-engine supercar. Very precise steering and handling, but it doesn't have the rear-end grip of the others and is eager to drift around a corner. While it looks cool and is fun, sideways is not the fastest way around a track."

Cars.com Senior Editor Mike Hanley found the RC F outmatched against the others on the track: "The V-8 doesn't have enough power coming out of corners. The long-travel brake pedal and subsequent squishy pedal feel didn't inspire confidence like the M4 and ATS-V did."

"MotorWeek" producer Brian Robinson agreed about the engine. "You really have to rev it to get any power out of it, which kind of goes against every reason you buy a V-8. Usually V-8s have monster torque that you have a hard time unleashing; not the case here. Here it was mash the throttle, wait for the revs to build, and just when you start feeling something, the darn eight-speed automatic goes searching for a new gear."

The RC F we tested bowed out midday as the judges finished their testing runs; track workers noted it was belching blue and black smoke, so we parked it. In later driving on regular roads, we noticed no further issues.

The M4 was clearly equipped for track days with its huge carbon-ceramic brakes. The heat- and fade-resistant carbon-ceramics became superstars during the subjective road-course evaluations.

Robinson certainly felt the brakes lived up to their high-tech hype. The "brakes are worth every penny if you plan on doing track days regularly, even though it's quite a few pennies. It would take much more than we threw at it to get them to fade."

The M4 isn't without its quirkiness. An overactive sport stability setting (M Dynamic mode) tripped up a few editors. It might not have been such an annoyance if Cadillac hadn't brought a much less-intrusive electronic traction and stability assist that helped turn the ATS-V into a more confident driver at the limit.
Rather than just one sport stability setting, the Cadillac's Performance Traction Management system, which is accessible through Track mode, seamlessly keeps the car moving through a corner when the stability system intervenes.

"Working my way up the PTM ladder helped me gain familiarity with the car and track before finding the perfect setting," Bruzek said. "BMW's M Dynamic mode doesn't keep the car moving forward as smoothly when wheel slip is detected. Instead of shutting you down, the Cadillac makes you look like a much better driver by keeping the car on line."

Cadillac's road-course performance is dangerously close to M4 territory. Some editors even thought the ATS-V edged out the M4 in certain areas.

"I would rank steering feel slightly above the M4," Robinson said. "Again, this car is not far off of the M4. The engine is absolutely fantastic, and the chassis was already a winner."

Hanley said he actually had more fun in the ATS-V. "Its steering feel is great, and the nimble chassis dances around corners."

Track driving provided impressions for the four judges' scoring of Acceleration, Braking, Handling and Fun to Drive categories. Out of a potential 160 points for those categories influenced by track performance, the M4 edged out the ATS-V and RC F with 137 points awarded by the expert judges. The ATS-V was close behind with 129 points, and the RC F trailed with 86 points.
You must log in or register to reply here.
Share: Facebook Twitter Google+ Reddit Pinterest Tumblr WhatsApp Email Link